Shifting baseline syndrome (SBS) is where humans lose perception of environmental change over time, by either generational amnesia, where younger generations are unaware of past environmental conditions1-3, or by personal amnesia, where individuals over time forget their own experiences of the past environment4.Professor Milner-Gulland talk on SBS suggested that this social phenomenon could have significant implications for conservation especially in global ecological monitoring. 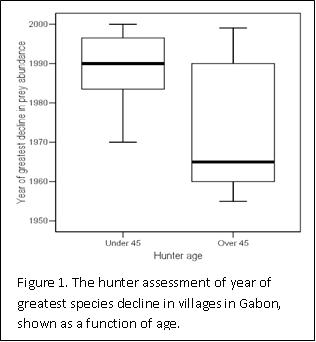 David Pulley suggested SBS in fisheries5, that different generation of fishery experts based their figures on the previous generations, excluding generations prior to that. Leading to further stock declines accommodating the disappearance of fish species, as the baseline shifts. Global monitoring relies on reliable baselines to measure how an ecosystem has changed but even recovering species will often never recover anywhere near their historical average.

Current literature lacks evidence of personal amnesia but generational amnesia has been suggested in children’s attitudes to their environment6, fishermen’s perception of fish stocks7 and from early explorer’s diaries8. Milner-Gulland highlighted generational amnesia in Gabon bush meat hunters, where there was an age difference in when individuals thought the decline in species occurred (Figure1) 9. The first test of SBS showed personal and generational amnesia in a study on perceptions of gardens birds in a UK village where respondents reported population changes of focal birds over 20 years10.

I find that SBS is too complex to measure and prove because SBS deals with human perceptions over time. Further research is required to understand its potential impact on conservation. If we are setting baselines for restoration where do we set them? We will never know our original baseline of pristine environment but at least with the awareness of baselines we aren’t “sleepwalking through the degradation of our natural world”11.

Error: Twitter did not respond. Please wait a few minutes and refresh this page.